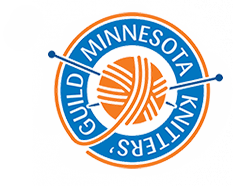 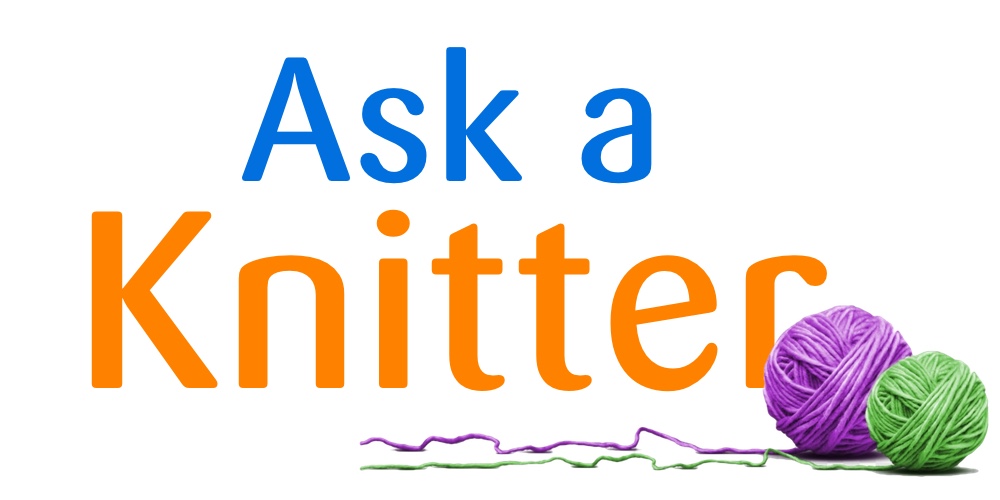 Barbara asks, “My granddaughter’s dog ate the pompom off her hat. It was a BIG pompom. My task is to reproduce this pompom. However, when I try to make a 3-4″ pompom, I get a mop. Is it possible for a home knitter to make a big, full pompom? If so, any hints are most welcome.”

Barbara say, “Thanks for all the helpful hints. I made one following a video. I did buy the Clover Pompom maker. Good thing because the dog chewed off my first pompom. I made 2 with the pompom maker, and have officially signed off on this hat!”

Carrie offers this advice, “I swear by the Clover pom pom makers. They’re available in many stores, they come in lots of sizes & they make pom pom making a breeze. Choose a size at least as big as you want your pom pom or bigger. I really load them up as much as I can when I wrap the yarn around. With any pom pom making technique trimming the pom is also key. I trim quite a bit off which seems to make the pom pom feel very thick & full. ”

There was also a second mention of the Clover pompom makers, “I just used a Clover pom pom maker to make several 3″ pom poms. Worked great! ”

Delia says, “You can make good pompoms whether you make your own cardboards circles or buy a nice pompom maker (like ones from Clover or Loome). However, the Clover and the Loome tools make the process very easy if you want lots of pompoms. When tying the center off, use a surgeon’s knot and extra strong thread or yarn, pull tightly around a few times to really secure the pompom. One of my favorite tips for great pompoms is to trim them rather aggressively after the pompom is released from the tool. Make a trimming template — in Barbara’s case, she asked for a 3”-4” size so cut a circle measuring that desired diameter out of stiff cardboard — and use that as a guide to evenly trim down the pompom all the way around, fluffing it up as you go. A nice haircut makes every pompom look better, more full, and plush. There are lots of tutorials on making nice looking pompoms on YouTube and they all include trimming, trimming again, and then more trimming.” 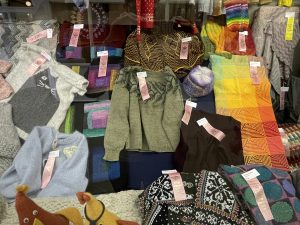 Here’s a brief recap the business portion of the September meeting. 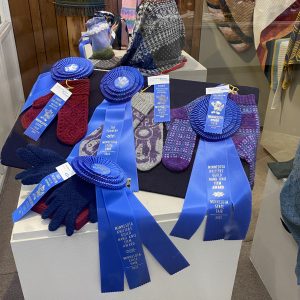 Huge thanks to everyone who submitted photos and information about their entries in the Minnesota State Fair and county fairs. 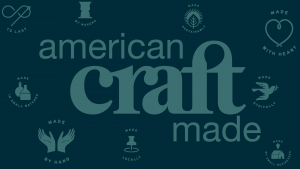 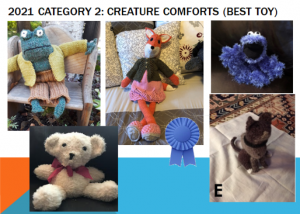 The “No Fair” Awards are back again for 2022! We’ve had so much fun the last couple years with these awards, we decided to bring them back even though fairs across the country are back to their “normal” status. 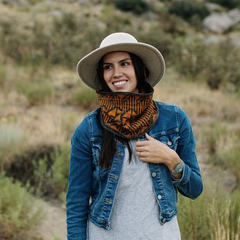 September’s designer is Jennifer Berg – The Native Knitter.  Jennifer was our speaker for the August Guild meeting as we have received so many positive comments, we decided to feature her patterns this month.

Gneons’s first baseball game is with the mnknitguild for Stitch and Pitch!

Look what I did! I spun my own wool!! I’m not sure how many yards I have here but hoping I could turn this into fingerless gloves or a hat…something small.

Special shoutout to thebotanicalknitter for teaching me and getting me to go down this rabbit hole🤣😉.

Checking my yarns to make sure the colors have enough contrast for color work.
#knitting #colorworkknitting #mnknitters #mkgshowandtell ...

It was #KnitTheRiver day! Huge thanks to darnknitanyway for hosting a lovely afternoon of knitting on a boat! 🧶🛥️ ...

I know, D. I want to grab my knitting all the time too 💕 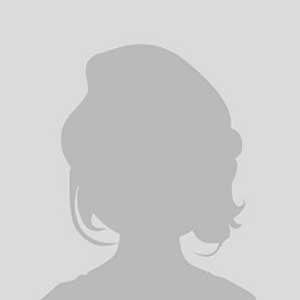 Meg grew up surrounded by makers. Her mom, a master quilter, former Home Ec teacher, and 4-H club leader in Duluth, taught her to sew, embroider, and cook. She won a trip to the State Fair as the Dress Review Princess at 13! Another MKG member taught her to knit continental style 15 years ago. Meg can’t sit still and NOT be knitting, embroidering, rug hooking or sewing. Favorite thing to knit? Mittens! She loves taking classes and learning new things – absolutely amazed and inspired by all the amazing knitters in the guild! (she, her, hers) 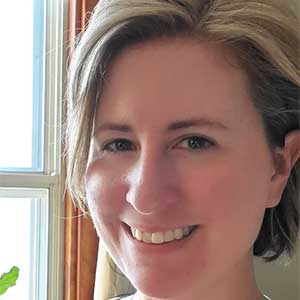 Jess learned to knit in middle school and attempted (but never quite finished) a few garter stitch scarves. Years later, she picked up crochet with her best friend in law school and eventually fell back into knitting. Ever since then, she's been a daily knitter (commuting time for the win!) and has never looked back. She enjoys knitting gifts for friends and family and loves trying new techniques. (she, her, hers) 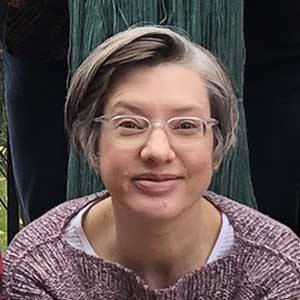 Laura learned to knit in 2003 by taking a four-week class during MIT's annual January Independent Activities Period. The class project was a striped hat knit in the round, and since that time, Laura has been a big advocate of 1) helping other adults learn to knit for the first time, 2) hats as a manageable first project, and 3) circular needles for everything. She enjoys thinking about knitting and planning her next project almost as much as she enjoys actually knitting. Laura is highly motivated by knit-alongs and loves to knit in community. (she, her, hers)

While Anna learned to knit at some long-forgotten point in time, her commitment to the craft really began her freshman year of college. Sitting still has never been Anna’s strong suit, and giving her hands something to do while chatting with friends or watching movies in the dorm brought a sense of calm during this new chapter of her life. Once the sense of calm wore off (and no one else needed a scarf), she began trying new techniques, patterns, and projects, and until 2018 was primarily a self-taught knitter. After being intimidated early in her crafting, Anna feels strongly about creating a welcoming environment within the fiber community for people of all ages, abilities, and backgrounds. She enjoys knitting and fiber traveling, test and service knitting, a good challenge (knitting or otherwise), and is likely to have at least 3 WIPs at any one time. She is also learning to spin and ply her own yarn! (she/her/hers) 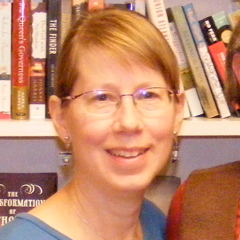 Bonnie comes from a long line of makers, so between their sewing and her own knitting, her Barbies had loads of one-of-a-kind dresses. She loves to buy yarn and knit while she travels, so she has a yarn stash the size of Cleveland and memories imbued with knitting; she can tell you exactly what baby sweater she was making on the overnight ferry from Rab to Split, Croatia, in 1985. When she isn't knitting, Bonnie is dyeing yarn and vintage textiles, embroidering, and making felt or silk paper vessels. She's happiest when she is learning a new skill or knitting technique. (she, her, hers) 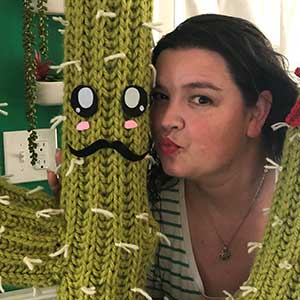 Melissa has been knitting for 15 years. She loves socks and sweaters. She is a new member who hopes to use her marketing background to lift up the MKG. While she isn't local to MN, she really loves the atmosphere created by the Guild. Melissa and significant other Al enjoy traveling, wherein Al graciously offers to drive so Melissa can knit in the passenger seat. (she, her, hers) 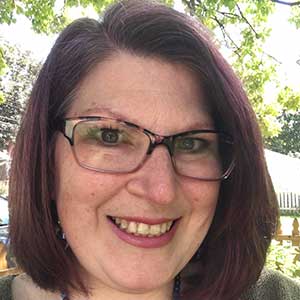 Nikky was first introduced to knitting in 2012 when her visiting sister-in-law taught her the basics of casting on and the knit stitch. A few weeks later, she learned how to purl from her mother-in-law. From there, it quickly became a passion and she has taken on each new project with a desire to expand her skill and discover new techniques. She loves a good mystery (knit-a-long) and knits way more shawls than a single person can wear in a month. 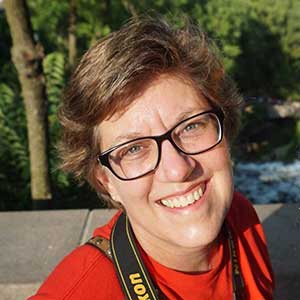 Betsy never had patience for knitting, until she found herself spending a lot of time at little league games and waiting for the last kid to emerge from the locker room after swim practice. With her background in graphic design, stranded colorwork has a natural appeal. Not to mention the practicality of an extra layer of warmth. Betsy has recently begun publishing her original hat and cowl patterns, which are available on Ravelry. (she, her, hers) (See our Service Knitting Page for more information about our current projects and donation process.) 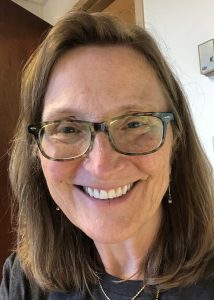 Janet taught herself to knit from a small green and white paperback called “Learn to Knit” at the age of 10ish. Her first attempt at a cardigan, with some very heavyweight baby blue yarn, was done without checking gauge. As you can imagine, it was very large, but amazingly still lives in the closet of one of her younger sister‘s friends! To this day, she still struggles with doing a gauge swatch every time, although the journey of making the product is always fun! Janet loves to knit socks, sweaters, and hats, but blankets? Not so much. She likes color knitting as well as making cables. Lace? Not very good at that. (she, her, hers) 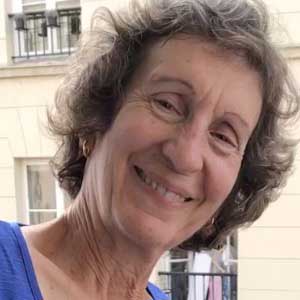 Rose learned to knit from her mother at the age of ten. She started knitting on the ends of small paint brushes. She continued to knit off and on through her teenage and young adult years and became a more avid knitter after taking a Norwegian sweater knitting class through community education. Today, knitting has become a passion and she knits for charity, herself, and her family her stash. She enjoys meeting other knitters and learning new techniques. 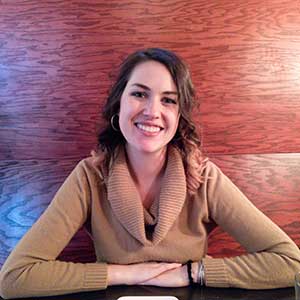 Kelsey learned the knit stitch from her grandmother in middle school, and filled in the gaps enough to make lots of scarves for quite a few years. She began expanding her skills in college and is always looking to learn more. Kelsey is drawn toward projects that are seamless or include stranded colorwork. (she, her, hers) 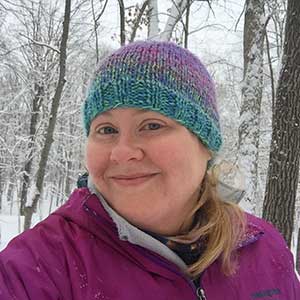 A visiting friend from Seattle taught Kelly the very basics of knitting (a twisted loop cast on and just the knit stitch) in 2008 before flying home. Turning to the internet (thanks knittinghelp.com!) Kelly taught herself through a lot of trial and error. Uncontent to keep knitting the scarf she’d started as her first project, she jumped into knitting a pair of striped mittens for her non-knitter, but very knitworthy, twin sister. Twelve years later the mittens are still in her sister’s glove box, and Kelly is usually horrified when she pulls them out and sees the mistakes she made using double pointed needles for the first time. Kelly loves knitting socks and is thankful for the many months of cold weather when she gets to exclusively wear her handknits. (she, her, hers) 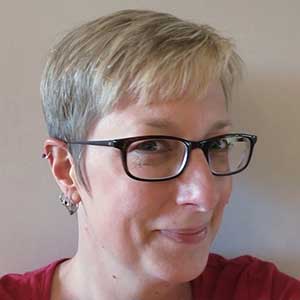 Kathy has always been into crafts, but didn’t teach herself to knit until after college. She really got hooked while living in San Francisco when a friend opened a knitting store. To pitch in, Kathy started knitting up fun (and odd) things for window displays, as well as teaching classes. In the last couple of years, she has started designing her own knitting patterns (many of them available for free on Ravelry!) with toys and mittens being her primary obsessions. (she/her/hers)